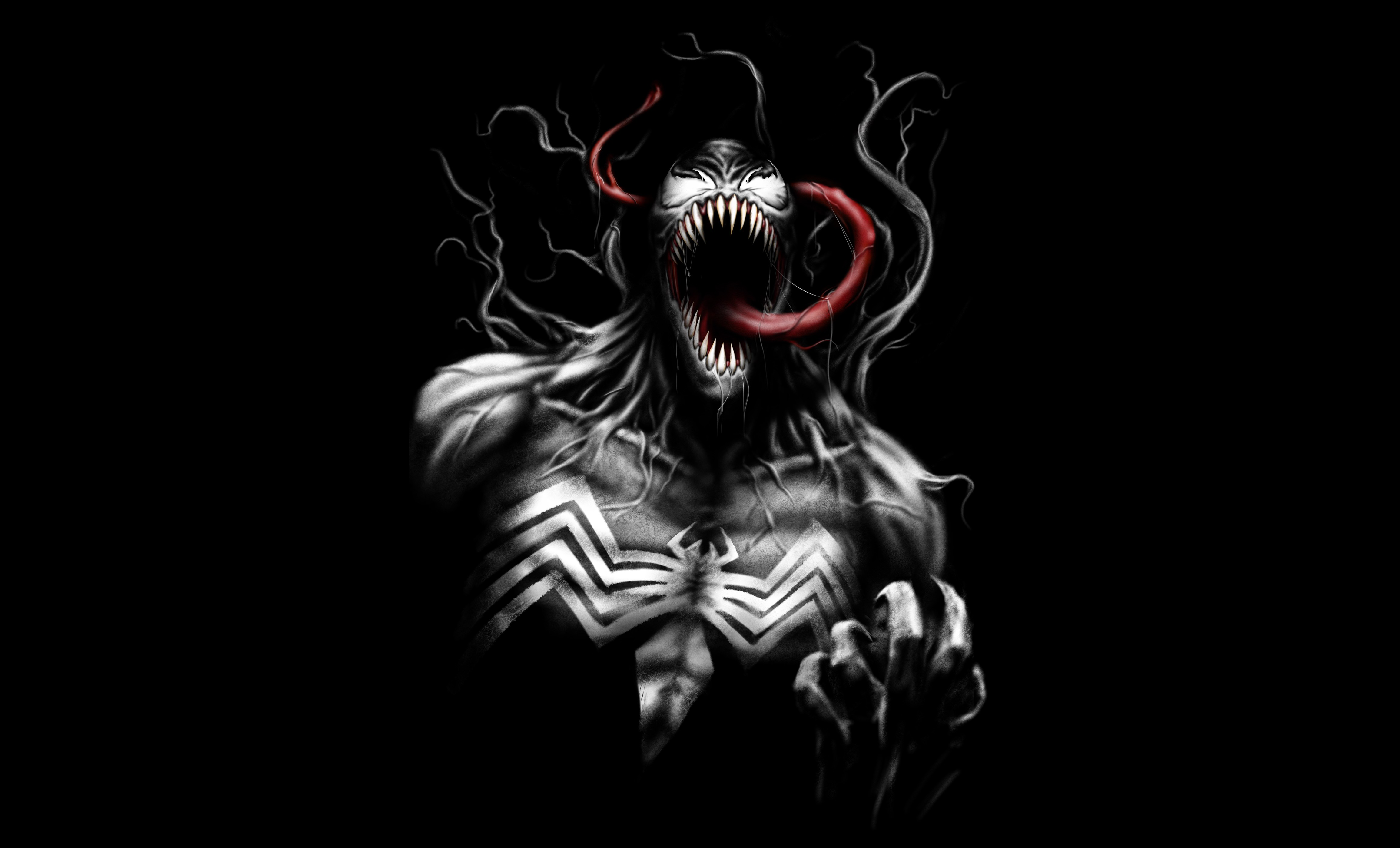 In the Spider-Man series, Venom not only attaches itself to human hosts, but also gives them enormous powers, along with making their personality darker and more terrifying.

This vicious villain is an equal—if not more—match for all of Spider-Man’s strengths and is considered to be Spider-Man’s fiercest opponents.

5 Interesting facts about Venom that you did not know 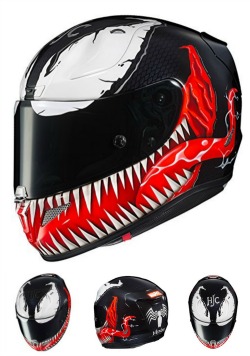 Here are some things that you probably did not know about Venom.

1. Idea for Venom was originally given by a fan

The idea for creating Venom actually came from a fan’s letter showing the designs of a black suit for Spider-Man. The then editor-in chief Jim Shooter loved it so much that he bought the idea from the fan, Randy Schueller for $220. The idea was slightly modified and a backstory was added. In the comics, it was shown that Spider-Man actually got his suit from a machine belonging to aliens. Later, he realized that the costume was alive and was trying to mess with his mind and knowing its weakness for sound waves, he clanged the bells at a church to get rid of it. Venom then found another new host, Eddie Brock—the only Venom host that appeared in the movie—and the first of many of Venom’s host. Thus this super-villain was born.

Most of us know of Spider-Man’s black suit and Eddie Brock—the journalist bent on revenge on Spider-Man for ruining his journalist life. Venom first becomes known as “Venom” after bonding with Eddie Brock. There are also other hosts whom Venom possessed as well. They are Angelo Fortunato, Mac Gorgon (known as Scorpion), Flash Thompson and Lee Price.

There are other less-known hosts of Venom as well, namely Ann Weying, who is Eddie Brock’s ex-wife, Patricia Robertson, a U.S. army communication specialist and the much more well-known Deadpool, who is hinted to be a prey of venom’s aggressive behaviour.

Though symbiotes generally need a host to survive, Venom can independently fend for itself at times. Venom has the power to shape-shift, camouflages itself as normal clothing, and helps its hosts escape from Spiderman’s spider-sense. It can form spikes or expand its size as well. Moreover, Venom’s abilities are not limited to its present host’s powers. It can draw and mimic the abilities of its former hosts as well, which makes it a deadly super-villain. It also comes with unlimited webbing power and is a sentient being that can even control the minds of its hosts. Venom can also shoot parts of itself on to its enemy’s body to kill them.

These powers make Venom a truly terrifying villain, more so because it won’t stop if its current host is defeated, but will merely find a new host to bond with.

4. Venom’s suit is powered by hatred

It was much more difficult for Spider-Man to defeat Eddie Brock than it was to defeat Mac Gorgon, aka Scorpion. This is because Eddie Brock hated Spider-Man even before Venom possessed him, and this hatred from the host further fuelled Venom’s powers and made it stronger. On the other hand, Scorpion had no personal revenge vendetta against Spider-Man and hence his hatred was not as strong as Venom’s former host, and thus it was much easier to defeat him.

This unique concept is one of the most remarkable traits of Venom—and shows how emotion can steer your actions.

5. Venom was originally going to be a woman

The first Venom host was originally going to be pregnant woman who witnessed her husband’s death and lost her baby in an accident caused by a taxi-driver who was distracted while watching Spider-Man. This loss would focus all her hatred into getting revenge on Spider-Man, much like Eddie Brock.

However, the editor Jim Salicrup, didn’t think that the woman would make a credible villain and hence she was swapped for Eddie Brock. Years later, Ann Weying would become the first female host of Venom.

When did Venom first appear in the series?

In the movies, people first caught a glimpse of Venom in Spider-Man 3 (where Tobey Maguire played Spider-Man) and its host was seen as Eddie Brock, the journalist with a grudge against Spider-Man.

Without a doubt, Venom was the design of the year 2016! Its detailed styling, simple awesome! Wait until you see what we are working on for you this year! Enjoy the weekend and ride safe! #HJC. @blackforestrider @miisses_black

Other appearances of Venom

Venom has also appeared in various TV-series, video games and also as a collectible toy figure from Marvel’s game, Heroscape.

S.H.I.E.L.D considers Venom to be one of the greatest threats to humanity. It is ranked as the 22nd Greatest Comic Book Villain of All Times, in a top-100 villain list prepared by IGN. Over the years, Venom’s characters also developed from a super-villain to more of an anti-hero. Venom is undoubtedly, one of the greatest created villains ever, and it helped in the development of the story of Spider-Man in a darker and more mature way. 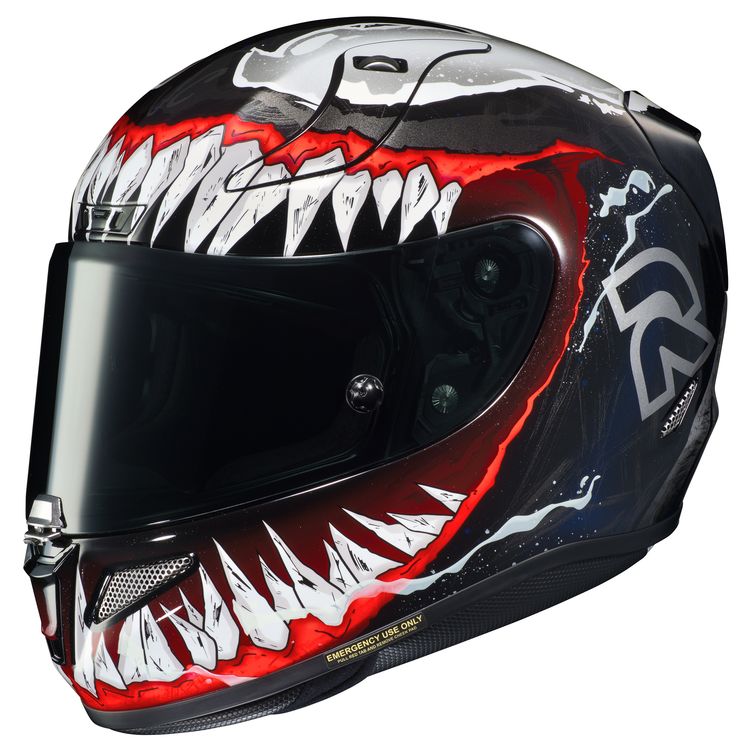 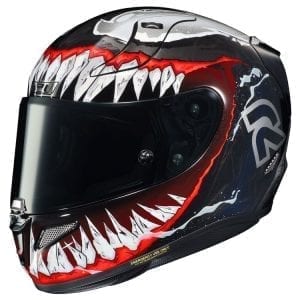 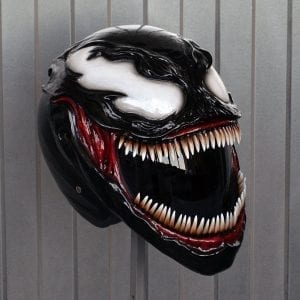 We are a manufacturer of unique motorcycle helmets. All our models have German Hizer DOT & ECE certified open face helmet inside. You can purchase this model in any size: from S to XXL.

For the buyers of our helmets we offer a wall mounts in the form of a skull with a $30 discount. You can see it by the link: www.etsy.com/listing/597524249
Its cost is $ 99, but if you buy the mount together with our helmet, then you will receive a 30$ discount and the final price of the mount with free shipping included will be $ 69.

The edge of the helmet has a soft decorative rubber band. Our colors are unique and correspond to the photos. We pack every helmet in a double box, strengthen the box with fiberglass and use several layers of foam and packaging film.

Over the past 12 months neither of our helmets has been damaged during transportation. However we recommend that you open the package at the post office, as in case there is any damage, it should be compensated by the carrier.

Every helmet is painted individually by our painters. The colors may vary slightly from what you see on the screen. 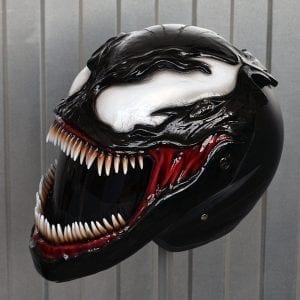 We have worked closely with RevZilla and Amazon over the years to provide our testers with products to review. Sometimes however smaller sellers focus on selling directly on marketplaces like Etsy. The team at Ghostbikernet can be found directly on Etsy, where they are rated highly.

Watch the heads turn, with this unique custom airbrush painted Venom full face motorcycle helmet and SEE THROUGH visor! Brought to you by Freshcoat Custom Paint.

All helmets will be brand new, unworn DOT approved HJC CS-R3 with tags. Ordering is easy. Take your measurements based on the sizing chart provided and choose your size.

Premium automotive paint is used on all helmets, sealed with high build urethane clearcoat. The helmet remains fully functional and visibility is compared to a tinted shield, not recommended for night or rain riding.

Once payment is received your helmet will be complete and shipped within a working week. Please inquire if you have your own custom helmet idea, or would prefer to use your own helmet.

To check out more custom paint, visit Freshcoat Custom Paint and “Like Us” on Facebook while you are there. Thanks and we look forward to your business. 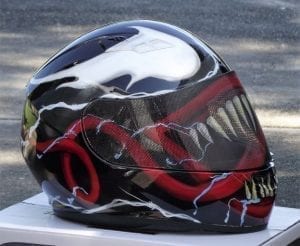 We have worked closely with RevZilla and Amazon over the years to provide our testers with products to review. Sometimes however smaller sellers focus on selling directly on marketplaces like Etsy. The team at FreshcoatCustomPaint can be found directly on Etsy, where they are rated highly.