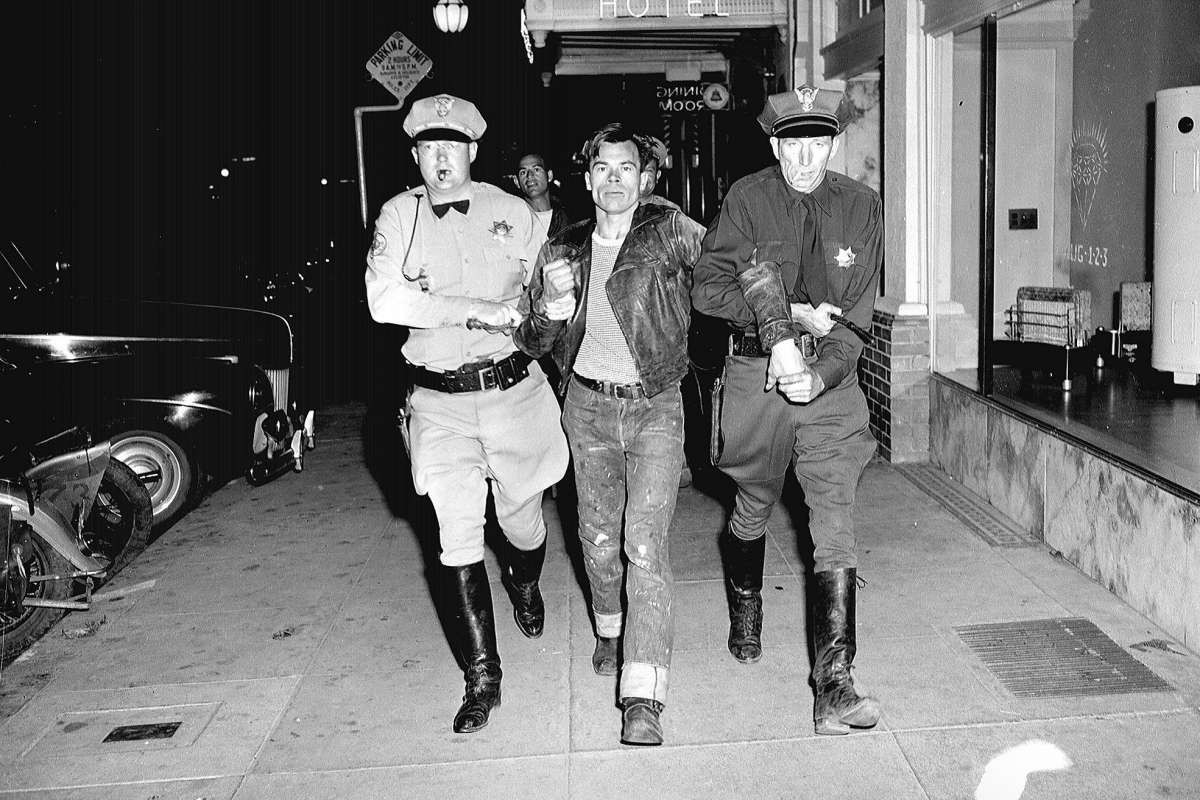 The noise. The speed. The danger. The rebellion. It seems motorcycles were made to cause trouble. From scaring old ladies to changing the course of world cultures, it seems there is nothing motorcycles can’t flip upside-down, set on fire and have a good giggle about. But what if we were to try and judge the biggest upsets that motorcycles have ever caused?

Sure, there’s a whole world of smaller annoyances we cause the general public. But what about the ones that aren’t just coming from retirees with nothing better to do or do-gooders who think that everyone would live their lives in a bubble just like they do?

Put simply, what are the biggest controversies motorcycles have ever caused? Come with me now on a veritable DIsney ride through the tears, gnashed teeth and raspy, shouty voices that have accompanied the motorcycle’s 130-year reign.

After 8 years of rules enforcing the carrying of high-visibility vests in cars traveling in or through France, the 1st of January 2016 saw the French government enact laws that expanded the rules to cover motorcyclists, too.

Contrary to popular belief, the rules didn’t mean that motorcyclists had to wear these vests; they were to be ‘stored’ on or in the motorcycle until such time as needed. This was mainly seen by the non-bike-riding bureaucrats as a measure that would prevent road-side motorcyclists being taken out by passing traffic – especially during bad weather and mechanical failures.

Of course, we all know that motorcyclists just love being told what to do. Not. And remember that this rule would be applied to any bikes on French roads, so even Brits, Germans and Italians out for a bit of a trans-continental jaunt would have to comply. Many complained that a significant proportion of motorcyclists didn’t have a place to store the vests on their bikes.

Even more saw it as a massive overreach that would inevitably be updated in a few years’ time to force the vests to be worn all the time.

Originally the French Interior Minister, Claude Guéant, wanted to strictly enforce it, but after he was pressured by many E.U. riders and a French motorcyclist’s pressure group, the Fédération Française des Motards en Colère, (literally, the ‘French Federation of Angry Bikers’) he backed down. The law now seems to be in a kind of limbo state, where it still exists but police don’t – or won’t – enforce it.

Like many Western countries, Australia in the 1970s not only saw a boom in motorcycle ownership, it also saw a boom in motorcycle accidents and injuries. While it was mostly Aussie farmers and “dole bludgers” that owned and rode bikes in the ‘60s, by the mid ‘70s and thanks in no small  part to the film ‘On Any Sunday’ by Bruce Brown, every man, woman and dog was going at it. The authorities needed a solution to help curb the stats and to make them look like they actually cared. Enter stage left, compulsory daytime running lights for motorcycles.

Taken straight from the Volvo playbook, Australian states started introducing these rules on all new motorcycles sold in their jurisdictions in the 1970s. And many bikers being bikers weren’t having a bar of it. All the old, trusty complaints were wheeled out. It would increase fuel consumption and wear and tear on bikes. Riders would be continuously replacing bulbs. Riders traveling in groups would blind other motorists. Besides, what would the government know about motorcycles? Sure, that last one is completely true, but as for the others… not so much.

Action groups were formed and placards were painted. In the end, the laws passed without too much fuss and went on to become a global phenomena over the next two decades. In an example of beautiful irony, many a global moto lobby group later campaigned against compulsory daytime running lights for cars as they were concerned that motorcycles would now lose some of their visibility. As the truism goes, if everyone stands out, no one does.

To bikers, it’s the highwater mark of motorcycle racing. To non-riders it’s a slaughterhouse of speed, insanity and death. Why would anyone risk their life for a race? It’s one of those issues where both sides are worlds apart and the chances of them coming together are pretty much zero. But the TT used to be just another moto race of sorts until the 1970 installment.

Sure, riders had died before and no one wants that, but things really came to a head when seven riders lost their lives in one year. Six of those were at the TT itself. And spectators have lost their lives, too.

Riders and non-riders alike were appalled. Surely this was a bridge too far? Just imagine if seven players were killed at a World Cup Soccer event or the Superbowl? And yet the 115-year-old race soldiers on. Again in 2016, five riders died. We get that entrants in the event know full well of the dangers and choose to participate in it anyway. But outsiders looking in only see the bodies and are at a loss as to why it still goes ahead.

Of course, the modern scourge of ludicrous insurance premiums and over-regulation of almost everything may still yet claim the race, but for the time being it continues to be a dangerous but beautiful dance that has direct connections to an important bygone era many of us deeply cherish.

In a controversy for no one but ourselves, ever since electric motorcycles made an appearance on the scene a decade or so ago, the more traditional amongst us have been concerned about internal combustion going the way of the dinosaurs. Indeed, an Italian rider put it to me very succinctly a few years ago. “Le moto elettriche non hanno anima,” he said. Or in English, “Electric motorcycles have no soul.”

Now, I ‘m all for innovation and technological advancements because I know that the future of electric vehicles will be amazing. Who wouldn’t want a 200 hp bike that can accelerate like a MotoGP winner, only costs a buck of two to charge and has 50,000 kilometer service intervals?

But we all get what he means. There’s something missing when the bike doesn’t make any sound and has perfect, linear power delivery all the time. It feels cold and characterless. Compare and contrast that with an old 1940s Harley. Talk about chalk and cheese. And so some of us get all uppity and dismiss electric bikes as the end of the motorcycling world. But are they? No one’s going to take away our old Harleys. They’ll be there for as long as we keep maintaining them.

So the reality is that within 20 years or so we’ll still have the classics and a whole bunch of bikes from the ‘70s to the 2020s to ride along with some amazing new electric bikes, too. We’ll be spoilt for choice, so what’s not to like?

I’ve written at length about the Hollister riots in the past, but as a cornerstone moment of motorcycle culture, I feel the event is more than worth revisiting. For those not in the know, the riots were basically the start of outlaw motorcycle culture globally. So next time you see a one percenter tearing around your local neighborhood causing trouble, you can thank Hollister.

Basically just a bunch of ex-service men and women hanging out with friends over a weekend in a small Californian town, things got a little rowdy after a few too many beers were sunk and the rest is motorcycling history. Marlon Brando’s legendary ‘The Wild Ones’ movie is basically just Hollywood’s hopped-up version of the Hollister riots.

Unsurprisingly, the truth turned out to be a little more mundane and less shocking than the media beat-ups of the day suggested. While they’d have you believe that it was tantamount to a viking raid replete with all the raping and pillaging, the truth of the matter that it was probably no worse than a decent new year’s eve in any American town.

Yes, bottles were broken and yes, there was some ‘spirited’ riding conducted; but were these not the exact same people that had just saved the world from the Nazis in Europe?

Sure, there were a few arrests. But they also spent a shit ton of cash in the town and the locals were so outraged by the event, they gave permission for it  to go ahead in subsequent years. Still, Life Magazine managed to whip up the fervor of ‘decent people’ and pretty soon most of middle America were scared of greasy bikers breaking down their front doors and impregnating their daughters. And the stereotype still persists to this day. Now that’s what I call a proper controversy.