Gifs are funny little videos that make me happy. I know, it’s not 1987 when the first Gif was made and soon after thousands were made popular. But I still see some very funny and very original Motorcycle Gifs. Another thing that I like about a good biker gif is that they have such a diverse production value range, and are still eye-catching. A simple graphic animation that takes a few minutes to edit together with Imovie can be just as awesome as one that was clearly put together by a professional with a budget.

Life goes by fast, especially speeding around the track on a your motorcycle. This Gif represents  the need to slow down and look at the scenery. In this one, that scenery is a tall blonde with black knee high boots on walking down the center of the road in the middle of nowhere to who-knows-where. It’s not that it doesn’t make sense, it’s that it doesn’t have to. 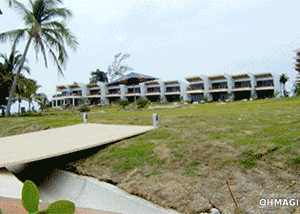 Some tricks go horribly wrong, while other are executed perfectly. This happens to be one that ends well for the rider. He hauls-balls down a slight grass hill, and shoots himself across a clear pool of water to the other side.  I was hoping for an accident here; but don’t worry, there are 8 more Gifs to go. 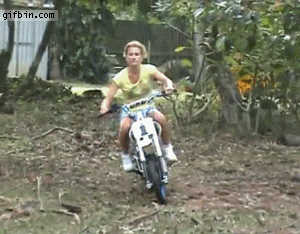 This girl was just cruising the back yard, having herself a nice little ride on a sunny afternoon – until she lost it a skidded her unprotected self across the dirt-pond backyard. No protective gear needed here – just a few bandaids and round 2. 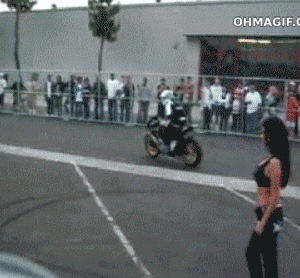 Street bikers have played around with the stoppie wheelie for years. Some get it right the first time – some don’t. This guy seems to get it right and is not content with just doing that as a trick in this parking lot playground. He lines up a skinny, long black haired babe and gives her a kiss mid wheelie. Well played my friend – well played indeed.

5. Biker gets bumped by car – intentionally

This biker is riding right next to a car at night with some sort of road rage fued going down. The car swearves a bit to the left as if to bump the motorcycle right off the road, but the biker stays up – and the so does the rage.

6.  High Five with a Bus Driver

This heads up shot of a biker riding a offroad motorcycle in the city is riding close enough to a double bus that he can stick his hand out and give him a high five. High five bro! 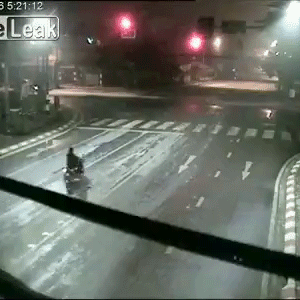 Coming up to a stop light on a motorcycle one should look left and right. In this case, looking behind you is also a good idea when a car is barreling down on top of you without stopping for the red light that you are parked at. 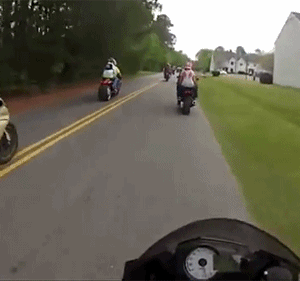 8. Passengers should hold on

Sweetie, when I say hold on, I mean HOLD ON! This motorcycle ride is about to get bumpy or I am about to pass a slow moving car. Or, just crusing down the road, you should also at least make a slight effort to hold on better than this.

This would not be a motorcycle site without mentioning the show Sons of Anarchy. Call me a fan-boy, but the show is awesome, and some of the branded gear is equally is as awesome (and probably makes more $$ than the show).

Ride Safe, and may your next ride be Badass!

Back to The Badass Helmet Store