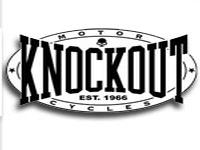 This bike was originally built as the Rat Rocket to celebrate the Rat’s Hole show in Daytona, which was initiated by Big Daddy Rat in 1952. Ralph worked with Rick Krost of U.S. Choppers and Paughco to add his wide tire (220mm) touch to the famous board track platform. “It’s still old school,” Ralph said, “with modern shit added including my billet front end. Then we painted it with the Rat’s strange show colors. During one of the toughest economic times in the history of this fine land, Lorenzo Lamas and Ralph Randolph, of Knockout Motorcycles, are kicking off a motorcycle company, Lorenzo Lamas Cycles. This bike is the basis of the modle they will call the Reno Rocket.