Many of us grew up watching Power Rangers and true fans don’t stop with just watching the series and calling it good. True fans take their admiration to a whole new level, and one of the best ways to do this is to buy a Power Rangers motorcycle helmet.

Before I dig into the options out there for riders looking to rep their favorite Power Ranger out on the road, let’s take a look at the different Power Rangers and their attributes. True fans will already know this stuff, but for those of you who need a refresher, here’s what you need to know.

Who Are the Power Rangers? 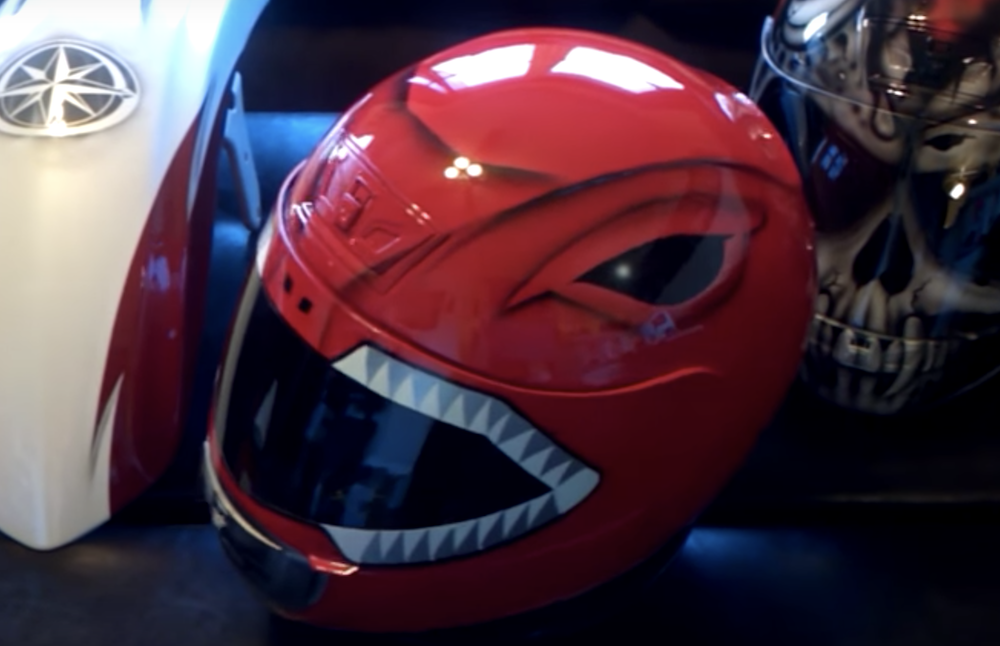 A Power Ranger is a young person recruited by Zordon and trained to morph into a superhero. Power Rangers wear full-body, tight-fitting spandex suits and helmets. When morphed Power Rangers exhibit superhuman abilities and skills and can pilot massive assault machines called Zords.

An important part of the Power Ranger’s suit is his or her helmet. The helmet is the same color as the rest of their suit, protects them and hides their identity. Here’s a look at the core Power Rangers team.

The Red Ranger, also known as Jason Lee Scott, is really the leader of the Power Rangers. Jason is a martial artist from California. He’s originally from the fictional town of Angel Grove. Jason is the first to believe Zordon about the superpowers. He was given the Dinozord Power Coin of the Tyrannosaurus.

The Black Ranger, also known as Zack Taylor, also attended the fictional Angel Grove High School. He is an energetic and upbeat character with martial arts skills almost on the same level as the Red Ranger. Zach receives the Mastodon Power Coin from Zordon when he becomes a Power Ranger.

The Blue Ranger, also known as Billy Cranston, and is a unique member of the group who is known for being the brains of the Power Rangers. Billy starts out as a stereotypical nerd but progresses as a character throughout the series. He receives the Triceratops Power Coin from Zordon when he became a Power Ranger.

The Yellow Ranger, also known as Trini Kwan, she’s chosen by Zordon for her quick wits and top-level martial arts skills, including her knowledge of kung fu. She’s also another smart one of the group often discussing technical topics with the Blue Ranger. Zordon gave her the Saver-Toothed Tiger Power Coin.

The Pink Ranger, also known as Kimberly Hart, is the pretty stereotypical valley girl of the group but as the series progresses she becomes more caring and kind-hearted. She’s also smart and cunning. Her gymnastic skills are what make her a good fighter. Zordon gave her the Pterodactyl Power Coin.

The Green Ranger, also known as Tommy Oliver, went to the fictional Angel Grove High School and sparred with the Red Ranger in a martial arts tournament before joining the group. He’s charismatic as well as a good fighter and is given the Dragon Power Coin by the evil witch Rita Repulsa. After battling with the other Rangers Tommy loses his powers and comes back as the White Ranger later in the series.

What Power Rangers Helmets Can You Buy?

So, now you know all you need to know about each of the Power Rangers. What do you do if you want to wear a helmet just like your idols? You get one of the following helmets. These helmets are the best out there. 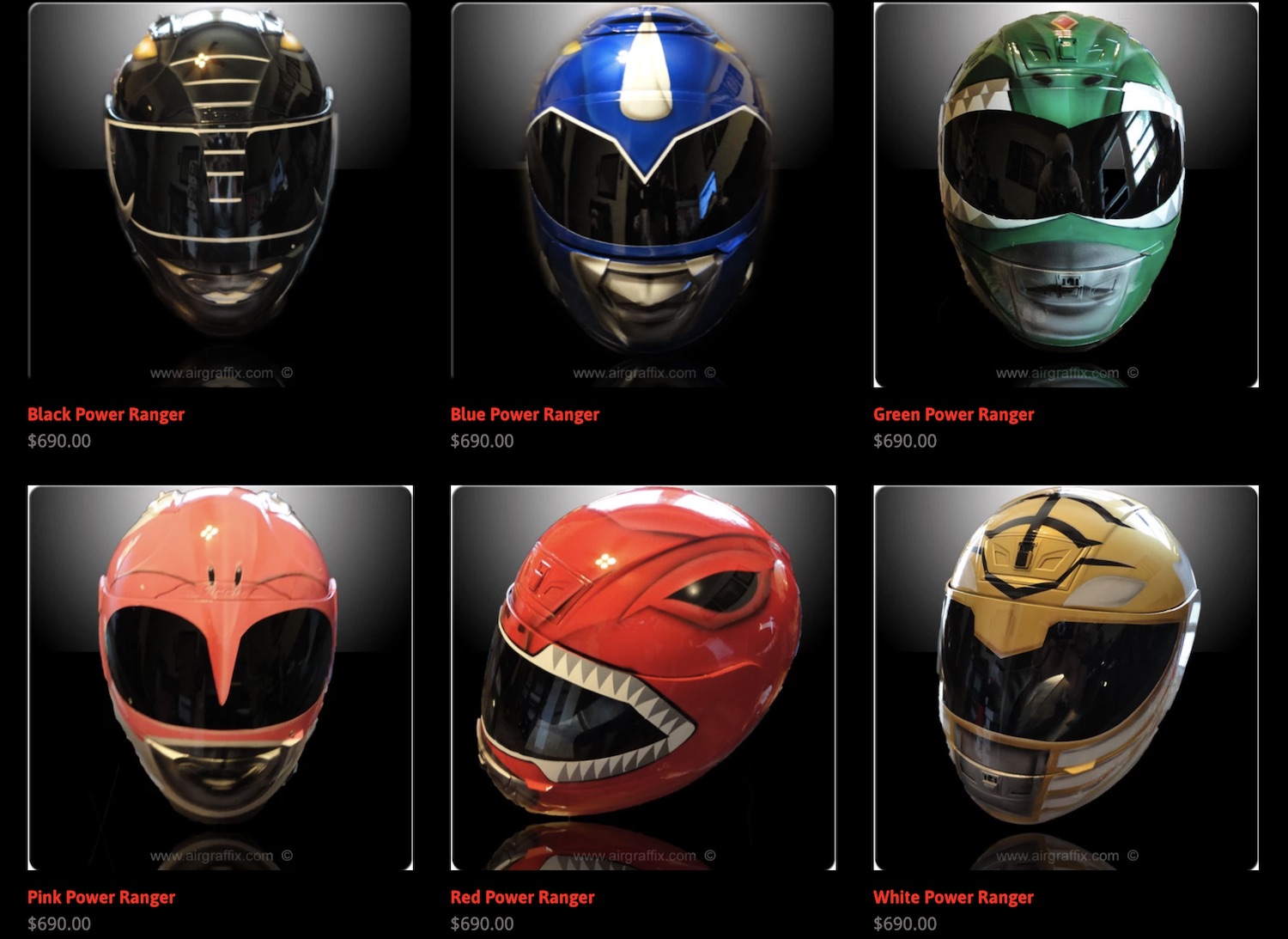 If you’re looking for a truly unique Power Rangers Helmet that gives you the true look from the show, then you need to check out Air Graffix’s helmets. The company airbrushes the design of the Power Ranger of your choice onto a helmet from their selection. Check out the video below to see a helmet airbrushed with Green Power Ranger’s design.

You can get the design on everything from an HJC CS-R3 to an Arai Signet X. The minimum price for these helmets is $690. If you want to upgrade the lid from the base HJC model, you’ll add to that bottom line price.

Helmets That Kind of Look Like the Power Rangers 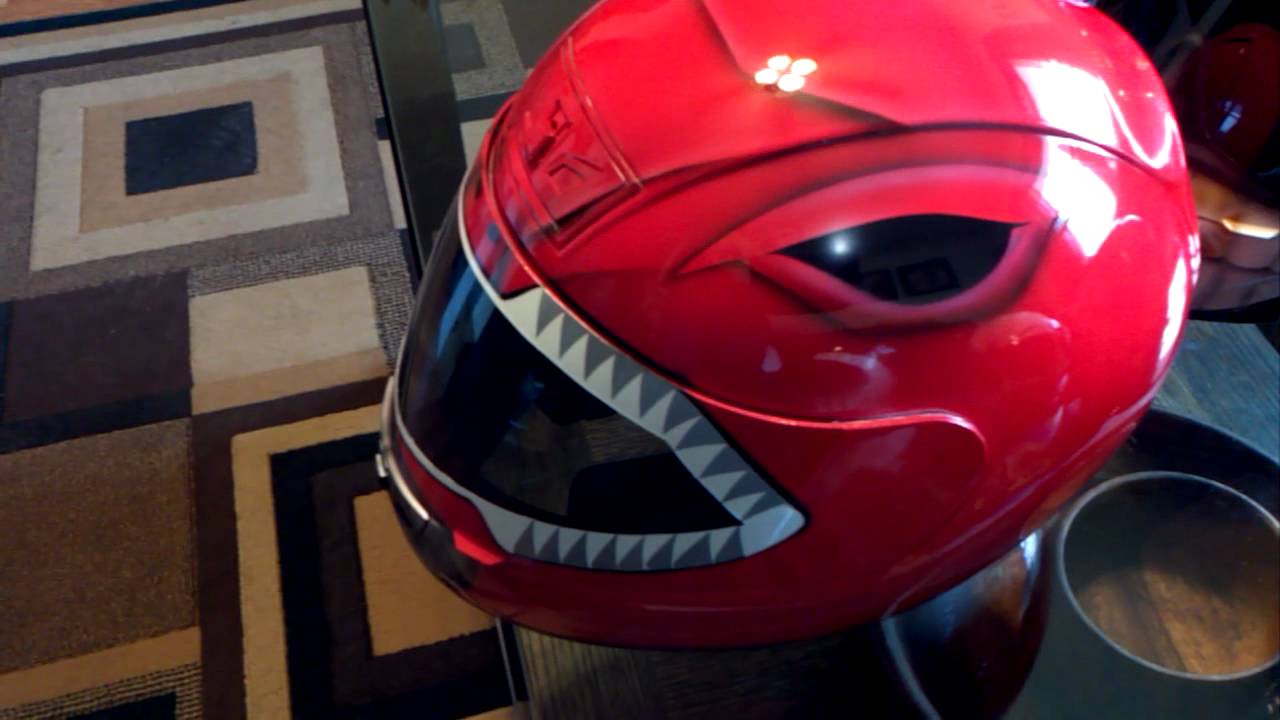 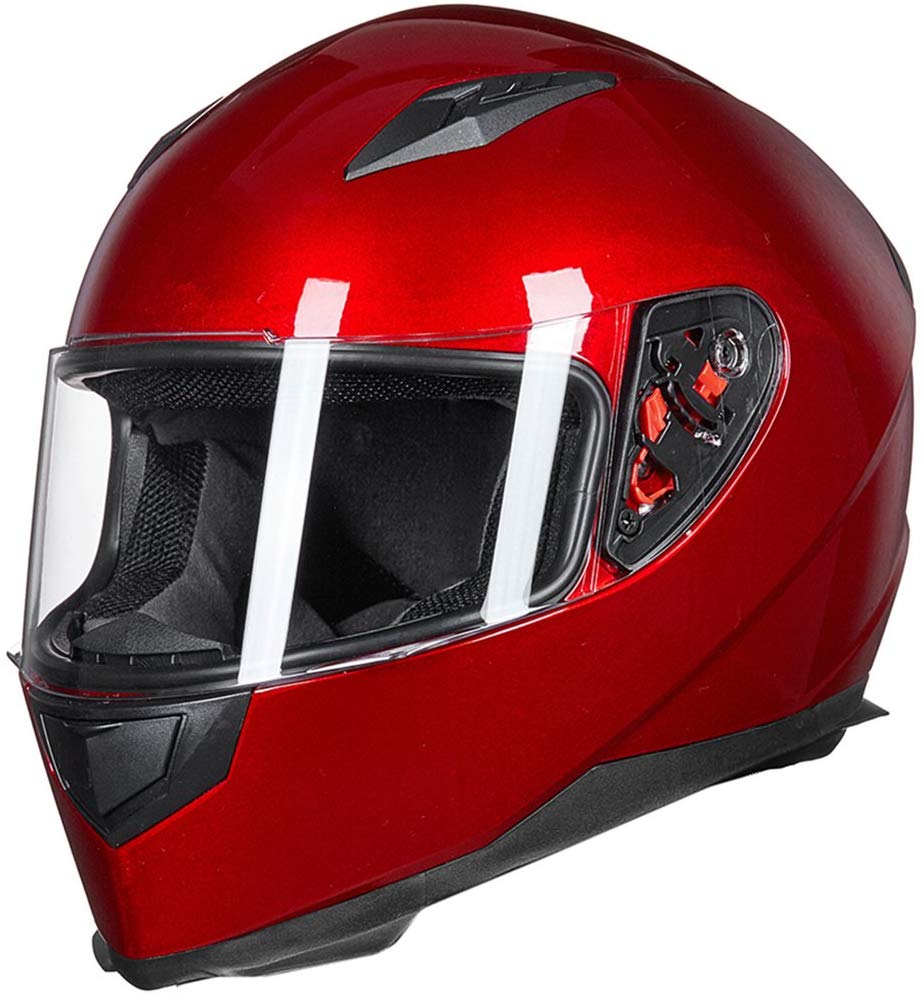 The ILM full-face motorcycle helmet shown above is an interesting item. It’s sleek and features accents that come close to mimicking some of the Power Rangers helmets. Is it the same thing? Definitely not, but it’s also not nearly as expensive as the custom helmets from Air Graffix.

The helmet comes an ABS exterior shell, a removable liner, and a quick release chin strap. It is DOT approved and also comes with a smoked face shield that you can add to enhance the look. 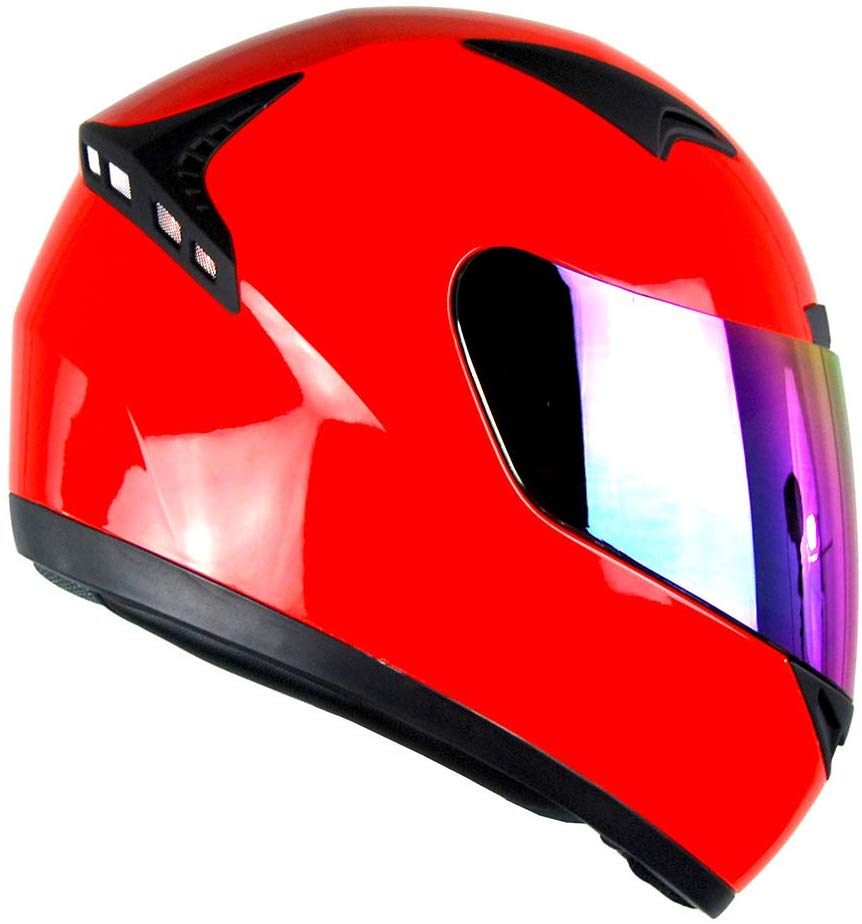 The 1Storm motorcycle helmet is another full-face option that blends sleek styling and bright colors to make something that resembles the Power Rangers helmets for a fraction of the price of the Air Graffix custom helmets.

This helmet features various ventilation channels to keep your head cool, a removable interior liner, and aerodynamic shell design. This helmet is DOT approved and comes with a tinted face shield. 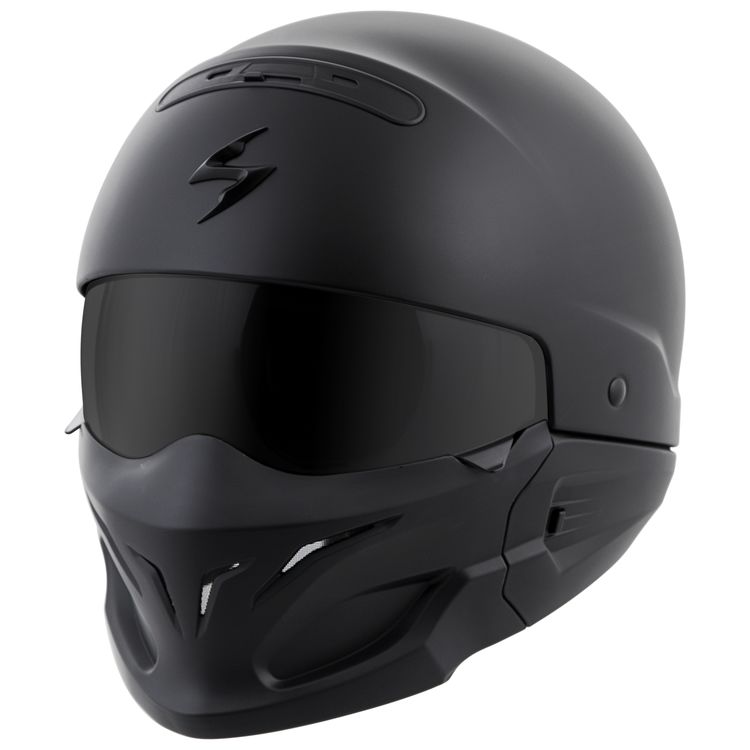 Okay, so the Scorpion Cover motorcycle helmet might look a little more like something one of the villains in the Power Rangers series would wear. That doesn’t stop it from being really cool.

It also comes with some killer features, including an advanced polycarbonate shell, a SpeedView internal sun visor, Kwikwick 2 anti-microbial fabric liner, dual-density EPS, and a removable front mask. The helmet is DOT approved.