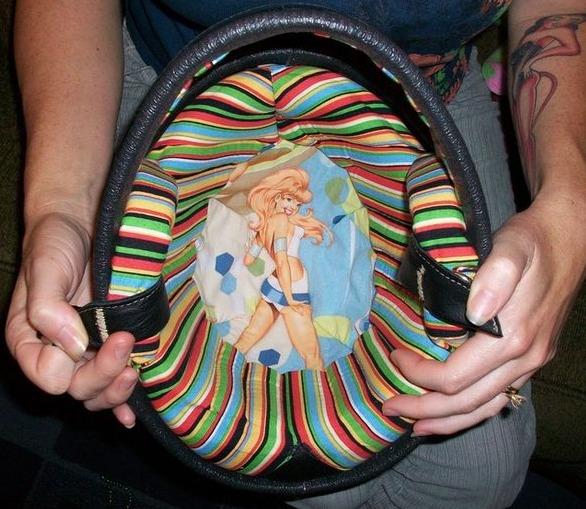 Immediately recognizable due to her bouncy curls, rosy cheeks, hourglass figure, and love of thematic lingerie, she has gained a place in the hearts and minds of many. But, how exactly did she come to be?

The newly released, “Art of the Pin-up” will be our guide as we travel back in time to explore the origins of the pin-up girl. Admittedly, its a peculiar journey, one that is a mixture of women’s lib and objectification.

When the safety bicycles were first introduced, in the early 19th century, they were quite popular among Western women. However, ministers and doctors were strongly against them; they claimed that the bouncing harmed the fragile insides of women and they were also worried that the friction that the seat caused would get the women aroused. Suffragists, however, dubbed the bicycle the “freedom machine” because of the independence that they afforded the women. These independent gals no longer had to be accompanied by male escorts everywhere that they went.

Relatively soon after safety bicycles hit the scene, women began forgoing their petticoats and layered skirts in favor of boots and bloomers. This fashion shift may seem simple now but, back then, it was virtually unheard of. This fashion shift revealed women’s legs as well as the rest of their bodies like never before. Not only were women more masculine but they were also more sexual as well.

One day, Edmond Osborne and Thomas Murphy came up with a simple concept; a calendar that features ads beneath the images. It was a stroke of genius because doing so would guarantee that businesses could buy ad space that would be valuable for an entire year. The first calendar was quite tame and featured a picture of George Washington; lo and behold wasn’t a great seller. However, the calendar market began to heat up in 1903 with the release of the first girl calendar called Cosette.

An illustrator for Life magazine, Charles Dana Gibson, shook up women’s fashion with his cover illustration of big busted women with hourglass shapes, full luscious lips, and dark thick, beautiful hair. Lucky man, thees pictures were inspired (at least in part) by Gibson’s wife and her family, and soon became recognized as a national icon known as the Gibson girl.

She was a girl that America loved, a girl that was known for both her independence and her sensuality. In a sense, she was the first dream girl. An unattainable prize whose beauty could only be made tangible when you pinned her photo on your wall.

Following the success of the Gibson Girl, other magazines decided to throw their hands into the ring as well. Pretty soon, there were Gibson copycats everywhere e.g. Howard Chandler Christy’s “Christy Girl” who was created for The Century Magazine in 1895, and Harrison Fisher’s “Fisher Girl” for Puck Magazine and Cosmopolitan from 1912-1932.

During World War I, President Woodrow Wilson formed the Division of Pictoral Publicity in order to inspire patriotism and to encourage new troops to fight. One of the main themes of these posters revolved around pretty women dressed in sexy military ensembles and with messages like “Be a Man and Do It” or “Gee, I Wish I Was A Man Man. I’d Join the Navy.”

With all the males away at war, women in the 20s tasted freedom for the first time and they were not willing to let it go. Add to this the jazz age with its shortened hems, illegal alcohol, bobbed hair, and youthful rebellion and the free spirited flapper generation was born. These women were wild, free, and were not shy about showing their skin. Rolf Armstrong, a popular artist, embraced this trend and dressed his pin-up girls even more scantily than ever before.

World War II heralded the pinnacle of pin-ups and the US government carefully designed images to boost morale. In this way, an all-American view was presented that showed soldiers sweethearts waiting eagerly at home for them. These pics showcased girls that were worth fighting for and the publicity stunt worked. Pretty soon, the pin-up could be found in submarines, barracks, and tucked into soldiers pockets in all branches of the military. 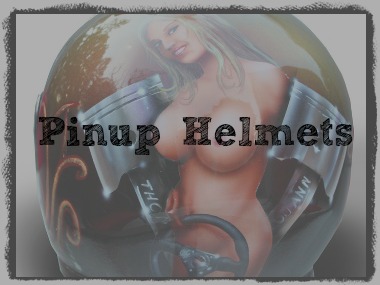 1953 is the year that Hugh Hefner debuted his infamous nudie mag. He used pin-up magazines as his muse. In this time, his concept was innovative and Hefner knew that the future of the female image lay in this type of photography.

By 1955 most of the magazines that were being published were more reminiscent of of Playboy than the pin-up covers that were at the height of popularity just a decade before. This is because, with the magazine’s debut, there was no longer a need to preserve the innocence of women.

After a while pop culture began losing interest in pin-ups, but not Charles Martignette, he never forgot about the beauty of these tantalizing, but aloof, women. He started collecting pinups at the age of 27 and spent the 80s buying every image that he could. Pretty soon, his obsession soon turned into a 4,300 piece collection of never exhibited pin-up art.

Pin-ups began to gain popularity once again because of an exhibition that was organized by Louis Meisel in 1982. They became even more popular with the publication of “The Great American Pin-up” in 1996.

In 2008, Martignette unexpectedly died of a heart attack. His extensive collection was donated to the Heritage Auctions in Dallas. The pinups were dispersed over 4 years and 12 auctions. His was the largest collection of surviving original pin-up art in the world.

The automotive world and that of motorcycles also enjoys the image of the female Pinup, the helmet being one of the most popular places to put one next to the side of the gas tank.

Of course, most professional helmet painters and artist are not apposed to painting a full topless women on what ever motorcycle part, helmet, or accessory that you want.

Don’t want to fork over the cost of a custom paint job or have a pin up model at home? These pinup girl stickers are a quick and easy way to show of your love for the pin up art style.