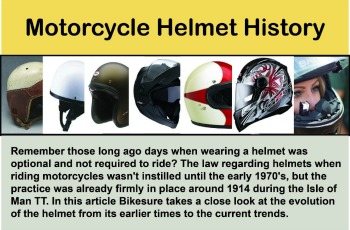 Remember those long ago days when wearing a helmet was optional and not required to ride? The law regarding helmets when riding motorcycles wasn’t instilled until the early 1970’s, but the practice was already firmly in place around 1914 during the Isle of Man TT.

In this article, we take a close look at the evolution of the helmet from its earlier times to the current trends. But first, a motorcycle helmet history infographic:

Pre-1900 – Leather is the standard. Simple and effective at the time.

Picture if you will the scene of men tearing around rudimentary dirt tracks, their rear tires churning out continuous streams of mud and soil, and the only thing between their skull and the ground a leather cap. The protection was minuscule, and in truth the only purpose such helmets served was to keep their hair out of their eyes as the wind whipped past their faces.

Concussions are a normal and accepted part of the sport, though little is done at first to alleviate the problem. This is the beginning of motorcycle racing at its finest and most dangerous.

By 1914 Dr. Eric Gardener managed to devise a modern-day helmet to help absorb and spread the force that riders were subjected to, thereby lowering the number of concussions. Riders at the Isle of Mann TT were seen to use these new helmets, and the idea caught on. In the USA it was even seen that racers would use old football helmets to keep their heads safe and secure. But despite the caution taken in racing, the idea did not make its way to the road as quickly.

The Death of A Hero

In May of 1935 a historical legend was lost when war hero T.E. Lawrence, better known as Lawrence of Arabia, fell off his Brough Superioronto an English country lane, sustaining massive head injuries that would only a short time later prove fatal. He was wearing only goggles and no helmet, which, as the attending physician stated, might well have saved his life. Nearly six years later, the British Army made wearing a helmet a mandatory practice for their dispatchers.

This type of helmet managed to remain popular well into the 1950s and even lasted until the 1960s, gaining traction amongst both sides of the mod/rocker Lambretta/Triumph divide.

With its fiberglass shell, chinstrap and leather interior, along with the earflaps it was miles beyond the old leather buckets that were only capable of keeping a rider’s vision clear and their ears out of the wind. There was no built in eye protection, but the cork shock shield and the cross webbing that was used for added ventilation added stability and comfort to this new style of protection.

The brands that were available and most used at this time were Cromwell, Lewis Leathers, Stadium, and Everoak.

Around the mid-1950s it still wasn’t a required law throughout most of the world to wear a lid. In the world of motor sports though this practice had taken firm hold. New technology was being invented and touted out to rider as well. Professor C.F. Lombard invented a new, shock-absorbing helmet for police officers in 1952. USAF fighter pilot helmets were also being looked at in terms of design and how they could be adapted to provide a better design for helmets used in motor sports.

Roy Richter, an LA Hot-Rodder and owner of his own company, Bell Autoparts, saw firsthand the damage done to riders who opted against wearing a helmet. In response he co-opted the latest tech from military sources to create the Bell 500, another type of helmet that would eventually revolutionize the industry and the sport.

By 1957 Bell had several early prototypes and had devised the Bell 500-TX, furthering the production and innovation of the helmet industry. The fame of this new ‘jet-style’ helmet was only further cemented when it was worn by such famous personalities as actor Steve McQueen and his stuntman, Bud Ekins.

The specs on this new helmet were impressive as it covered the base of the skull and the temples of the wearer. It featured a hand-laminated shell made of fiberglass and a quick-release, leather chinstrap. Thanks to its new and improved design it was also able to absorb far more of the shock should a rider ever fall off their bike.

By the 1960s there were many major players in the helmet industry, and all of them wanted their piece of the business. Bell was still the innovator and the dominant player on the field. As the stakes continued to rise so did the need for new and improved helmets, and eventually Bell moved off the track towards a new design for a new type of helmet.

In 1967 Bell was still keeping ahead of the curve when it came to stunt riding and racing, creating the first full-face helmet, the Bell Star. This helmet was made popular by the famous stuntman Evel Knievel, as well as famed actor Peter Fonda, who wore the “Stars and Stripes” model in the film “Easy Rider“. By this time the helmet was becoming a trend and was highly popularized as a fashion item.

The specs for this type of helmet included its one-piece construction, a nylon-covered interior, and snap buttons for a visor that could be attached and detached according to the preference of the wearer.

By this time helmet designs were changing rapidly or not at all, and Bell had all but played out its popularity among the hip and trendy. The Bell Star was the last great helmet devised by the company, and as a result earlier trends and newer, more popular models were beginning to replace the old favorites.

Before the law regarding lids was made, Bell was ahead of its time, revolutionizing the helmet industry in a way that was never seen before, and has rarely been seen since. Helmets in this day and age still take after the original Bell designs, but are mass-produced and have little, if any, of the original flair that was once present within the overall specs. While the importance of helmets can never be ignored, the flash they once had during their earliest inception is largely gone.