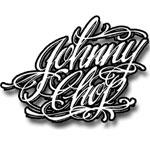 Johnny Chop hand formed the Hard Rock’s aluminum gas tank. He constructed it from several pieces he broke (bent) in the middle and then TIG welded together. Afterwards he ground the welds then sent it out for polishing. I forget how long he told me he had to build the bike, but I know he had hardly any time to assemble it. This tank has a few places where the polisher blew through the welds. There was no time left so Johnny had to send the bike off to the Seminole Hard Rock Roadhouse Tour as is. Text by John Gilbert