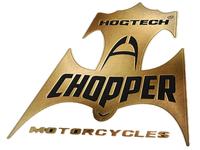 The homage to American funny cars and 60s-era Indy racers came to life in Sweden. It came into existence with and engine built by Paul Funk Netherlands and with Hogtech Sweden AB doing the bodywork and chassis design. The Brickyard Killer was one of those ephemeral puffs of whimsy that is formed during late night talks, fueled by drink and cigarettes. However, this bit of whimsy managed to survive. The resulting Brickyard Killer is a hardtail machine, emboldened with an FHP/S&S/Supercycles 1800cc knucklehead with Revtech 5 speed tranny. A single shock springer front end is constructed of tubular steel to maintain the design cues of the entire chassis. Custom ribbed backing plate on the rear brake was created to render the look of 60s Indy cars