The Baddest: 9 of the Best Cruisers from the Movies 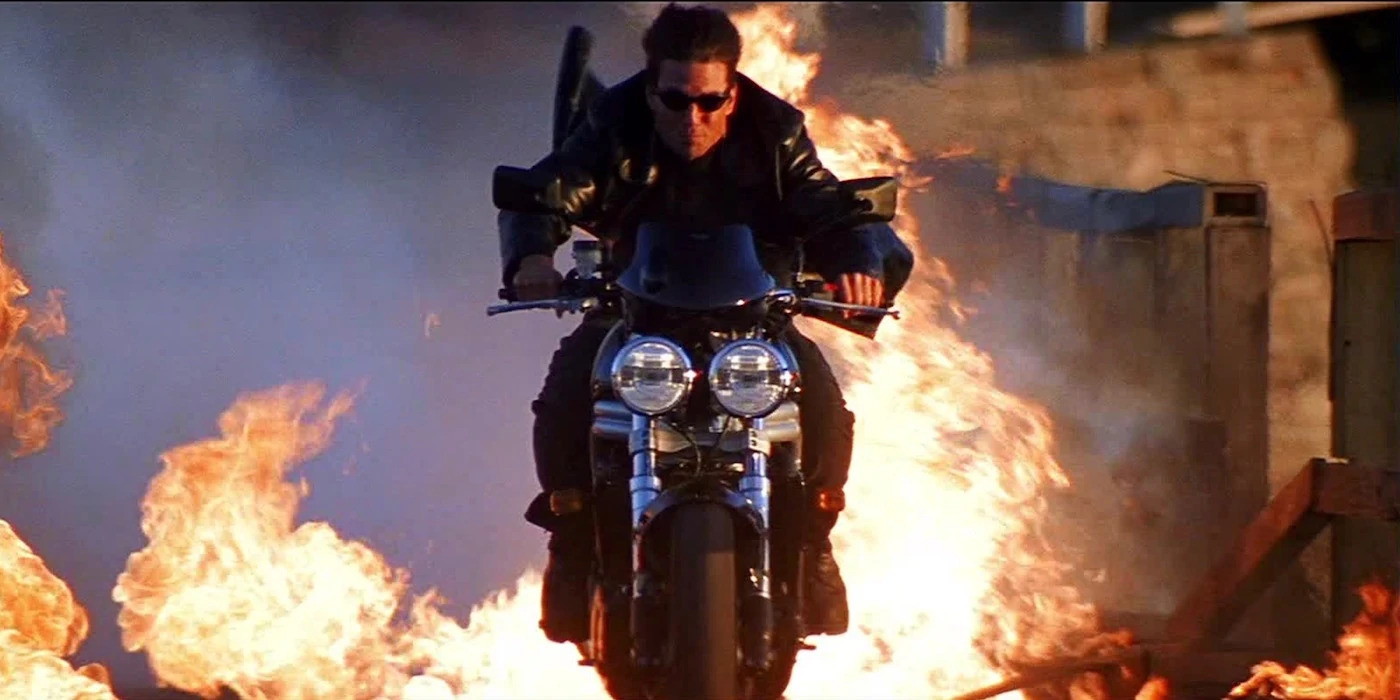 It’s fairly hard these days to find a movie playing in theaters that doesn’t have some kind of motorcycle involved. It could be background action, it could be a character’s bike, and in some movies, it could even be the entire star of the show. No matter what, however, there are some unique cruiser bikes that have not only made it to the silver screen, but been immortalized there.

For this list, to give a couple of bikes a bit of room to shine, we’re taking the loosest definition of cruiser: a bike with mid- or forward-pegs, wide/drag/monkey/etc. bars, and a reclined standard or fully reclined seating position. 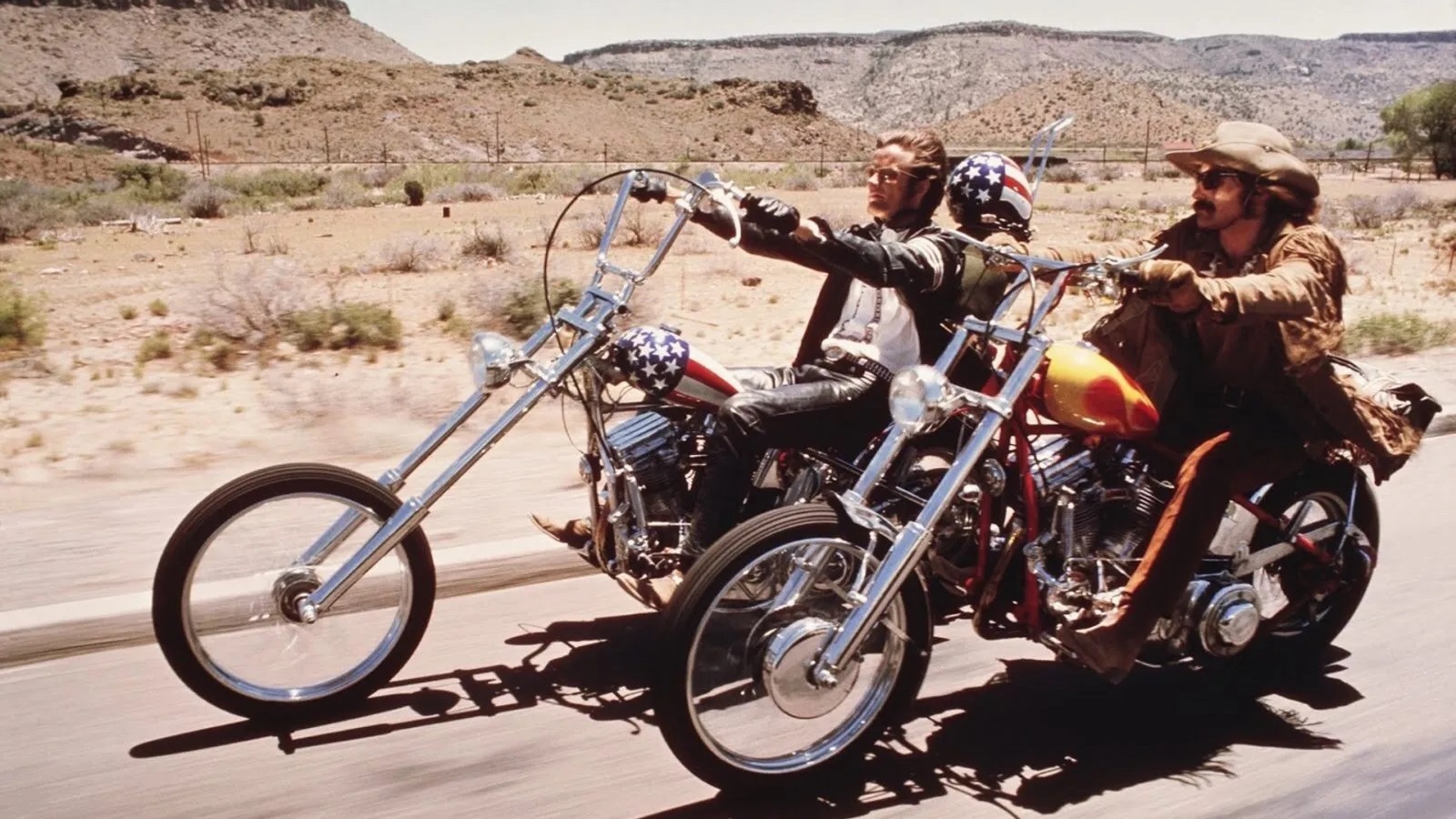 You can’t make a list about movie cruisers without including the most famous movie about one of the most famous bikes of all time. The 1952 H-D Panhead, widely considered one of the greatest Harleys ever made, painted in the red, white, and blue and slinging a classic V-twin Panhead in its frame is just about as close to a poster boy for movie choppers as you can get. It is the most prevalent bike in the movie, often being the center of attention or in the background—but always there and always visible.

It speaks volumes that in the last scene of the movie—in fact, the last thing on the screen before the credits roll—is the Captain America chopper. A starring role for a classic bike.

1983’s Rumble Fish is a superb, if dark and somewhat violent, look into the life of those in a motorcycle gang. It centers on the up-and-coming tough guy Rusty James, who is following in the footsteps of his older, former gang leader brother, The Motorcycle Boy. The key word there is “former,” as most of the drama centers around Motorcycle Boy trying to dissuade his younger brother from going down the same path he did. That’s about as spoiler-free a description as can be given, but it is well worth the watch, as it stars Matt Dillon and an in-his-prime Mickey Rourke.

Not what one would consider a classic cruiser, the Kawasaki 440 LTD used by the Motorcycle Boy nonetheless works beautifully as the introductory bike for the character. Despite it being a standard-style cruiser, it still oozes with badassery, especially with Mickey Rourke astride it. It should also be mentioned that the film was intentionally done in black and white by Francis Ford Coppola to highlight the classic motorcycle gang movies of the 50s and 60s while keeping the drama focused on the two protagonists and the bikes they chose to ride.

On screen for a grand total of about 10 minutes, the Harley Fat Boy (a model still in production today) in Terminator 2: Judgment Day is still remembered as being part of the whole reinvention of Arnold Schwarzenegger’s portrayal of the T-800. Terminator 2 is often cited as being one of the best sequels ever made, one of the few that surpassed its origin movie—and it was the perfect finishing touch to one of the most famous lines from the movie after the eponymous Terminator walks stark naked into a biker bar: “I need your clothes, your boots, and your motorcycle.”

The Fat Boy features as well in one of the best-choreographed action sequences of the 20th century. Chasing after the T-1000 Terminator, who itself is chasing John Connor on a dirt bike, the whole sequence features one-handed lever-action reloads of an 1887 Winchester shotgun, the T-800 riding the Fat Boy hard and fast, and one of the biggest rolling stunt jumps of the time into the Los Angeles viaducts.

The jump is especially famous, because even with the stunt bike being lightened and having reinforced suspension, it still bottomed out on the concrete of the viaduct, sending off some of the most famous sparks in cinema.

1953 Triumph Thunderbird 6T, The Wild One

The Wild One is like someone threw together all of the most badass things about 1953 motorcycle culture, and then added a classic bike into the mix. Let’s run down the list of badassery: Marlon Brando in his prime, wearing a Schott Classic Perfecto leather jacket, an iconic piece of gear at the time, astride a 1953 Triumph Thunderbird 6T, wearing a rider’s cap—the precursor to the half-helmet that is so popular amongst cruiser riders. Brando’s character, Johnny, is the leader of a motorcycle gang in the film, and he became a symbol of the rebellious nature of 50s and 60s motorcycle culture.

The movie did more than make Brando a headlining “bad boy”—it cemented the fact that a British cruiser could be just as iconic, if not more so, than the American bikes also featured in the movie. It can be safely argued that with The Wild One, Triumph not only secured their status as a legendary marque, but also provided one of the first true “hero bikes” of all cinema history.

2004’s The Motorcycle Diaries is an excellent movie in its own right, following the story of Ernesto Guevara de la Serna and his friend Alberto Granado before Ernesto became known as “Che”—one of the most famous revolutionaries of the 20th century. As the title of the movie states, however, there needed to be a motorcycle, and the 1939 Norton Model 18 is about as cruiser as you could get in South America in the 1950s.

Nicknamed La Poderosa (“The Mighty One”), this little 500cc single-cylinder motorcycle was loved by Ernesto, who wrote his memoirs during the trip, until it broke down. Despite being present for only about a third of the movie, it is still as much of a hero bike for the two friends on their months-long adventures across South America as is possible.

Another thing that makes this movie particularly special is that Norton Motorcycles themselves were involved, providing a few actual Model 18’s for the movie from their own museum and classics collections!

Okay, hear us out on this one, as this is why we took the loosest definition of a cruiser for this list. Yes, the bike is “neo-Tokyo” cyberpunk gold, but look at the wheels and tires as far to each end of the bike as possible, the wide stance of the handlebars, and the fact that it is about as reclined a seating position as you can get without lying down. It also has forward pegs, and Kaneda’s character is one of the leading members of a small-but-definitely-rebellious motorcycle gang.

Another reason this bike is so famous, so ingrained into the fabric of badass bikes, is that it is its own character. It is owned and ridden by Kaneda, drooled over and even ridden once by his friend and anti-hero Tetsuo, and is unmistakable in any scene it is included in, even if it’s just in the background covered by a sheet.

It also takes part in one of the best-realized motorcycle fight sequences in animation for a long time, part of which includes the image above when Kaneda performs a full slide to stop. No other bike in the entire movie looks or rides like it, and when Akira hit US shores in the late 1980s, it was one of the things that people remembered the most about the movie.

The Marvel Cinematic Universe has been very kind to fans of cruisers. With a few rare exceptions, almost every bike on screen has been a Harley-Davidson, including the LiveWire pre-production model used in Age of Ultron and the 1942 H-D WLA Liberator from the first Captain America movie. However, for this list, the baddest-assed motorcycle that good ol’ Cap rides is a mildly modified Street 750.

Still a cruiser by any definition, the Street 750 had premiered just a week before the first trailer for The Winter Soldier dropped. It also featured in one of the film’s extended, multi-area action sequences, starting with the famous elevator fight scene, and progressing to Steve Rogers escaping the parking garage and literally throwing himself off the bike at a QuadJet that was trying to stop him escaping. The entire scene ends with a pure reference to the comics, with the Captain doing a T-pose flip and landing with his shield down into the ground.

That famous line from Bruce Willis’ character Butch is uttered when he’s explaining how he came to be in possession of Grace, the H-D FXR Super Glide chopper. We can’t say much more without spoiling the movie for those that, somehow, have not seen one of Quentin Tarantino’s crowning achievements, but the bike is definitely something to be talked about.

The biggest mod, of course, are the ape-hangers up front. Other mods include fitting a Fat Bob tank, with custom bags and a Fat Bob rear fender. There is also a customized tachometer fitted at the top of the tank, just behind the headlight. A bit of movie trivia about the bike is that there are at least two bikes used—between scenes, Grace somehow acquires a second air cleaner, instead of the standard one that was part of the Super Glide series of bikes. The thought is that the second air cleaner is a horn or coil cover, but no-one really knows for sure!

Despite being on screen for less than a minute, it really must be highlighted that Quentin Tarantino went to enormous lengths to get the actual bikes in use by the German Werhmact (Army) during World War II. Designed to be used either with a sidecar or independently, the R12 was one of several BMW motorcycles manufactured for the Nazi regime that were, quite literally, military cruisers.

The R12s in question are on screen when Hans Landa, in a career-defining role for Christoph Waltz, arrives at the LaPadite farm for the infamous interrogation scene. His Mercedes-Benz 170 VK is escorted by two Werhmact soldiers astride the BMW R12’s. Later on in the movie, an even rarer bike, a BMW R71 with sidecar, is seen on the street outside of Shosanna’s cinema, and it is not a replica.

Again, Tarantino went to enormous lengths to get proper, functional versions of each bike, and it makes the movie all the better for it—despite those bikes having less than 90 seconds total screen time.