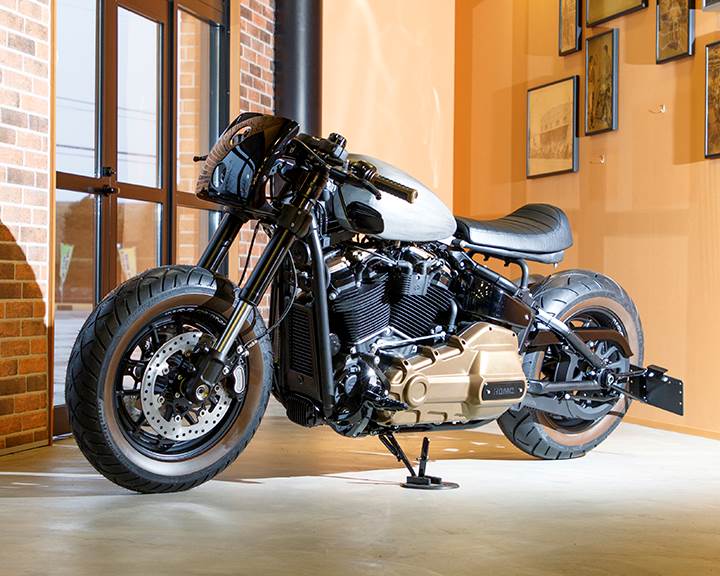 Harley Davidson Motorcycles are some of the most customizable bikes out on the road. Essentially, from the time of the company’s inception, its customers have been modifying and personalizing their bikes.

Harley customs are more than just cool motorcycles. They’re a mode of self-expression, a chance for riders to express themselves through steel. These bikes—and really any custom motorcycle—are quite simply works of art they move the body just as quickly and as far as they move the soul.

While there are so many cool custom bikes throughout the more than a century history of Harley-Davidson, 2019 has been an epic year for customs. Here’s a look at my favorite eight custom Harleys I’ve come across so far this year. 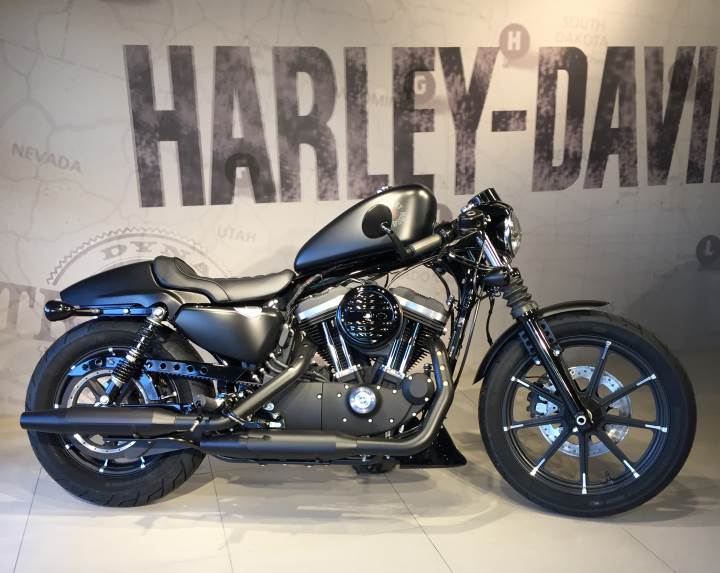 When it comes to cool Harley-Davidsons, the Iron 883 is already pretty high on the list. The bike comes from the factory looking great, and you can customize your ride plenty before you even take delivery of it.

However, this build called Iron Cafe crafted by Hirose Shotaro stands out from all other Iron 883s as a special bike. He used a wide variety of parts to blend elements of a cafe racer with the body of a Harley Sportster. He used many genuine Harley custom parts to complete the build. If you own a 883 you can create something like this with a little know-how and some sweat. 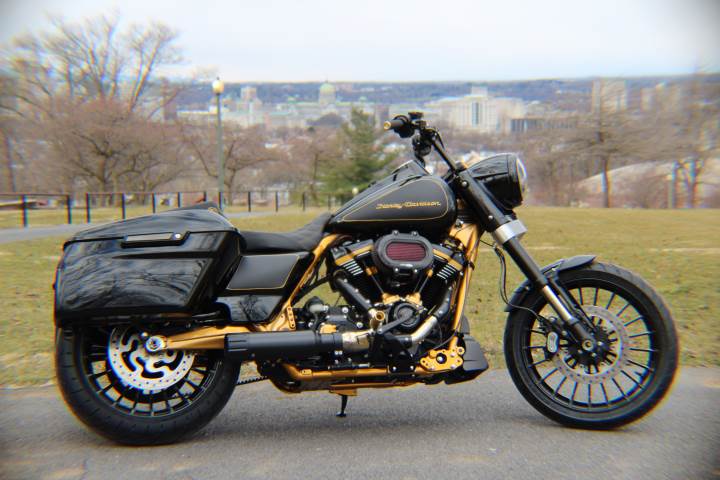 Do you need something with a little more flash than the Iron Cafe? How about this amazing black and gold Road King Special called Apex? It takes the bike to a whole new level I wasn’t ready for. The gold frame took me by surprise, and the more I look at it the more I like it.

Appalachian H-D Crew Chief Brandon Older and the rest of his team built this Harley. The team crafted the build in partnership with Cumberland Perry Area Vocational Technical School. The team tore down the bike all the way, repainted the frame and some other components, and then built it back up to the bike you see here. 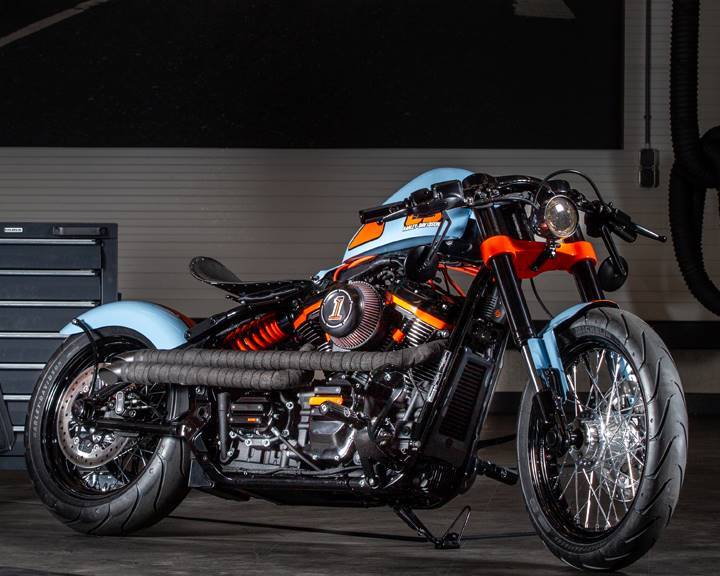 The bike you see before you is called the Signature. It was crafted by the guys at Harley-Davidson Oude Monnink Motors. The team there took a Harley-Davidson Sport Glide and made it go through an epic transformation.

The build included clip-on handlebars, moving the battery and wiring for aesthetic reasons, wire wheels, custom exhaust, and other Harley-Davidson parts collections, including the Defiant and Dominion collections. The end result is a beautiful blue and orange beast of a sporty motorcycle unlike any other Sport Glide on the road. 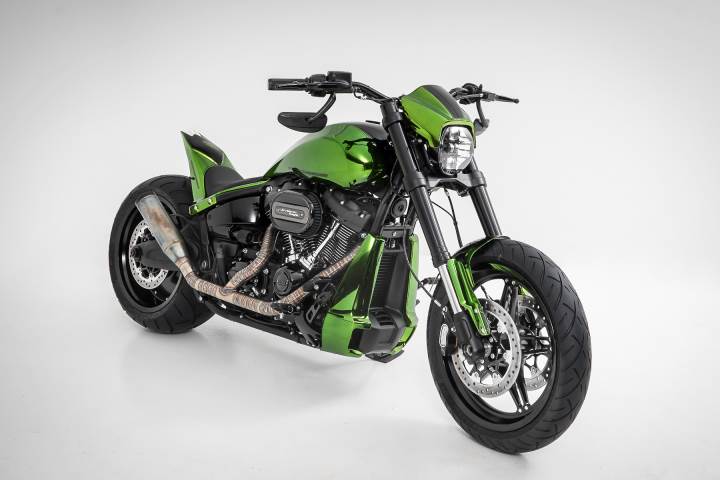 I can have weird thoughts sometimes, and the first thing this bike conjured up in my mind was Willem Dafeo as the Green Goblin in Spiderman from 2002. So, I guess the name The Green Monster is pretty dang accurate name for it.

This FXDR114 is a far cry from the model you’ll see in the showroom. The team at Harley-Davidson Graubünden made sure of that. The bike features a vibrant shiny green finish, custom body parts, and exhaust unlike any other machine on the road. This build used Harley Defiance and Dominion parts as well as some non-HD custom parts. 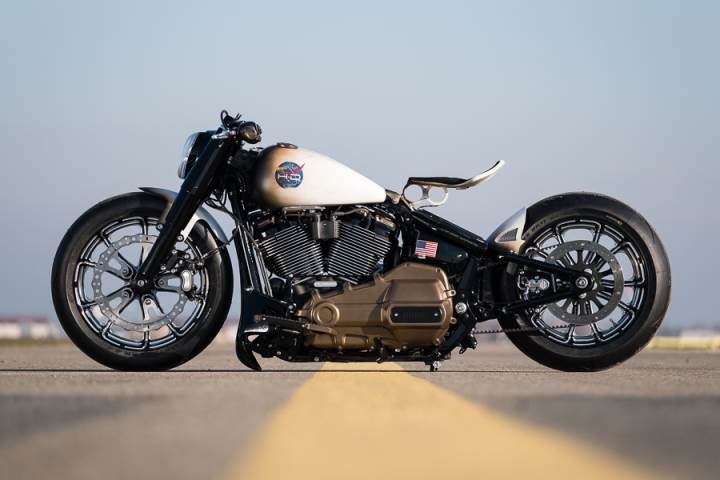 The Harley Heritage Classic is one model that lends itself nicely to a custom bobber build. However, it takes some serious work to get the motorcycle there. The guys at Harley-Davidson bologna appear to have had no real issues though. Their build Space Age is one of the most attractive bikes to come out in 2019.

It looks both new and old with a unique badge on the tank that incorporates the HD with a NASA-like design. The bike is a tribute Apollo 11 and the astronauts on it due to the fact that it’s been 50 years since the space mission. The legendary phrase “a small step for man, a big step for humanity are found under the saddle. The bike uses Dominion collection parts as well as some other custom parts. 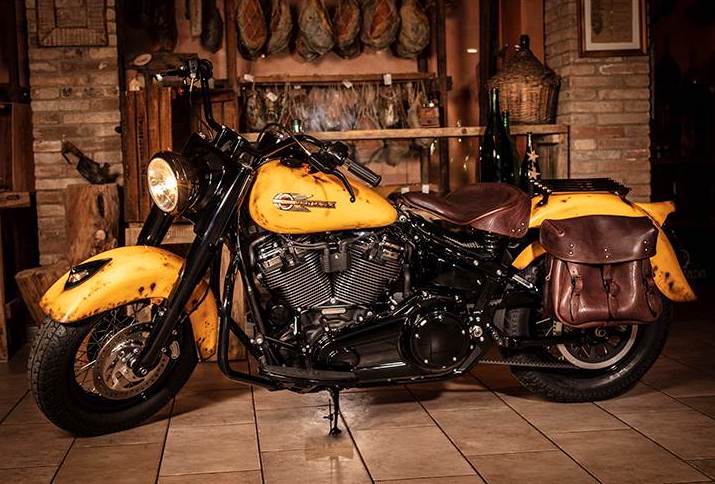 I love it when Harley builders honor the past of the iconic motorcycle company and that’s exactly the case with this Rusty Sun Softail. The bike is meant to remember all that the Heritage Softail at a time when Harley is shifting towards electric motorcycles. The bike blends together old-school style with a modern gasoline engine.

Everything from the tires to the leather saddle and saddlebags has a vintage look to it. I especially love the rough-looking finish on the paint for the tank and fenders. It’s juxtaposed nicely with the pristine black finish on the frame and engine parts. The bike used a lot of custom parts as well as HD parts. The guys at Harley-Davidson Onorio Moto know exactly how to take a modern bike and give it an artful purpose. 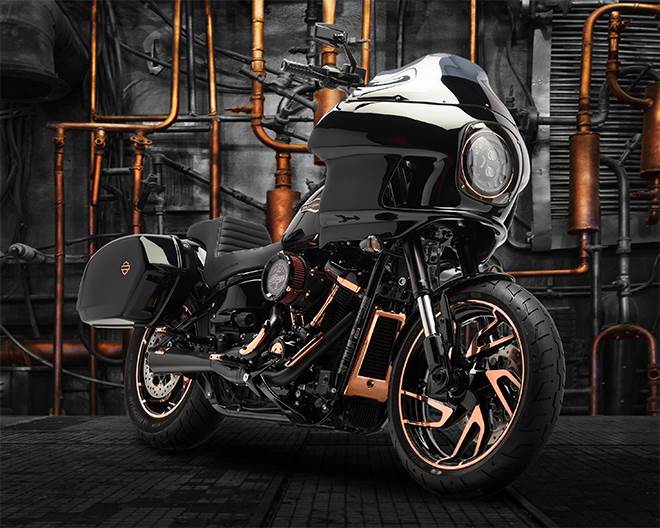 Leave it to the team at Calgary Harley-Davidson to take a Sport Glide and make it look like something out of a 1980s sci-fi movie. The bike looks like part big bagger motorcycle and part club style touring motorcycle. The unique fairing, black and bronze finishes, and the amazing stepped seat are all fantastic elements.

The bike is called Moonshine, and I think that’s pretty appropriate. It’s smooth visually but with a seriously nasty kick to it. The build was crafted using mostly HD parts and accessories. However, the team did have to take to other sources for some of the outsides of the box parts and accessories.

The Rough Cut is probably the most unique of any Harley custom I’ve come across this year. The team at Harley-Davidson Ishikawa transformed the Harley Fat Bob into an interesting cafe racer and street fighter mashup. The motorcycle is unlike any other Fatbob, and honestly any other Harley, on the road.

The team stripped the Fatbob down to its essentials and then took to modifying it. Many of the model’s parts come from the Dominion HD collection, but there are numerous others that are custom creations, including the fairing that gives the Rough Cut its unique face. The bike is a simplistic and rough-looking creation, which is why the name for it is perfect.