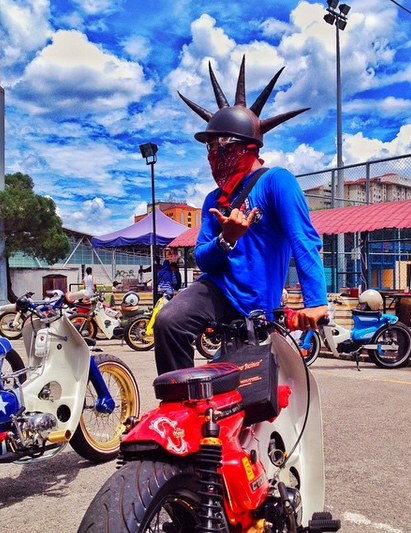 A little History on the Mohawk 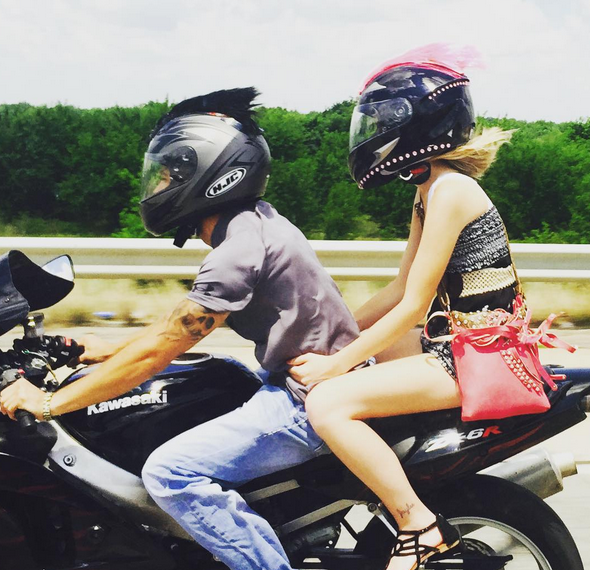 The Mohawk hairstyle (sometimes called the Mahican) has a unique style. A person shaves both sides of their head only leaving a strip of hair in the center of the head. This hairstyle originated with the Iroquois. Instead of shaving the hair they would pluck it out. This hairstyle also resembles a look made popular by the Pawnee instead of the Mahican tribe. The Clonycaven who are from Ireland were seen with this hairstyle in early times. When they moved to Europe they brought this look with them. The Mohawk dates all the way back between 392 BCE and 201BCE. Since hair gel had to be imported from Europe men with this hairstyle were considered to be affluent. Today people use the mohawk as a way to rebel from the norms of society.

The record for the tallest Mohawk in the world belongs to Kazuhiro Wantabe and it reached 44.6 inches in height.

While the hairstyle is said to take the name from the Mohawk nation the look became popular due to Hollywood productions. In 1939 the film Drums Along the Mohawk brought this style to the masses.

The real Mohawk style was hair that was plucked out of the head. A three inch square was left on the crown of the head and was braided into three braids. The traditional Mohawk headdress known as the Gustoweh represents the true style. This headdress has three eagle feathers in the back in place of the braids.

This hairstyle has been seen throughout history, back to the days of the caveman.  A Cloneycaven Man that was 2,000 years old was discovered near Dublin, Ireland in 2003. He was found with a Mohawk hairstyle. Pine resin and plant oil were used to hold the hair up in place. Artwork dating back from 600 BCE showed Scythian warriors with a style similar to the Mohawk. The Macai which was a tribe in northern Liberia was seen with this type of hair style as well.

During World War II, American soldiers including the paratroopers from the 101st Airborne Division were seen sporing Mohawks to intimidate the enemy soldiers. Troops during Vietnam also had the Mohawk cut. In 1950s this look became more mainstream. It was seen on musicians, bikers, teens, and all sorts rebellious types.

English Punks and the Spiked Mohawk

The Mohawk can take a lot of work to maintain. Shaving and trimming is needed on a regular basis between the short and long portions of the hair. This needs to be done often and carefully.
If the Mohawk is going to be worn up brushing, blow drying, and twisting are needed. A person will also need to spray the hair. In order to keep the hair up glue, egg whites, cornstarch, and even gelatin may have to be used. The more complicated the style is the more time will be required. If a person decides to do liberty spikes a lot of time is going to be needed for this look.

While the narrow Mohawk is popular there are other varieties. Some people have a strip of hair running for the forehead to the nape of the neck. The sides of the head are bald completely bald. Others the hair is just longer in the center and shorter on the sides to create the look of a mowhawk.

This style is big on the central strip of hair. A person can even have two strips known as a bi hawk or three strips known as the tri hawk. The crosshawk is a style that goes sideways on the head. This style goes from ear to ear.
The Liberty Spikes are when the hair is made into spikes. They can be one color or died to be many different colors.
The deathhawk is when the hair is teased and looks similar to dreadlocks. Some hair is left on the left side of the head in front of the ears.

The psychobility Mohawk is also called the quiff. This is a common form of the hairstyle for those that like psychobility. The sides of the head are shaved similar to the way that British National Service members would wear their hair. Some people refer to this as the Hitler Youth haircut and has become popular after World War II.

The Fohawk is a favorite of African Americans. They have a Mohawk with twists, cornrows, and other designs on the side, Mr. T made this look popular.

A Chelsea is a Mohawk complete with bangs which is popular for women. The movie Combat Girl featured this look. It is even more dramatic when the hair is dyed black. 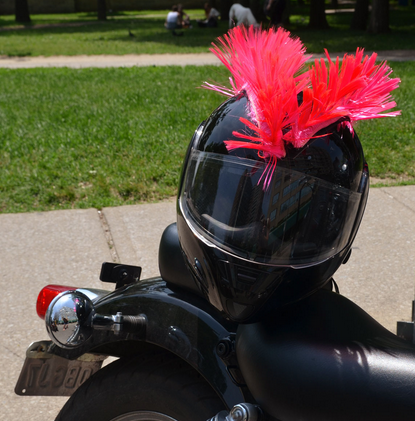 A fauxhawk is sort of like a Mohawk expect the sides are not shaved. There is usually a small amount of hair spiked up in the middle of the head. David Beckham once sported this look. Another fauxhawk features a person that wears hair in the enter of their head longer than the hair on either side of the head. This is popular in Europe and people often dye the hair bright colors. This is a very popular look among the punk rock scene.

A curly hawk is like the longer fauxhawk but there are curls instead of straight or spiked hair. Mary Kate and Ashley Olsen had this look when they were young children on Full House.

A braid hawk is a fauxhawk where the hair on the sides of the head is braided. This will make it look shorter without having to shave the hair. This is labor intensive and is usually done by a professional hair stylist.

Have an awesome mohawk on your own helmet? Send it over and I will get it up here.

Here are the rest of the cool helmet mohawks….


So where do you Buy a Mohawk for your own helmet? Here.